(Reuters) - England manager Gareth Southgate said he is open-minded about FIFA's proposals to hold the World Cup every two years, though he thought the tournament may lose some of its appeal if it moves away from the current four-year cycle.

FIFA's congress voted to carry out a feasibility study on holding the men's and women's World Cups every two years, a proposal which has been met with opposition, most notably from European governing body UEFA.

Southgate said he met with Arsene Wenger, FIFA's chief of global development, to discuss the proposals.

"As a traditionalist, it feels you could lose some of the allure of the World Cup because the scarcity of it makes it more important," he said.

"But I also get that if you are a player who has an injury for the World Cup, you might only get one opportunity every eight years, and that is really tough."

UEFA President Alexandr Ceferin said in a letter to Football Supporters Europe (FSE) last week there were "concerns across the footballing world" about FIFA's proposals.

Southgate said all stakeholders needed to be involved in the decision.

"The players' unions could gather the thoughts of the players and I just think everybody has to work together on the calendar. It has to be coordinated," he added.

"If we are looking that far ahead, there is no reason it can't be." 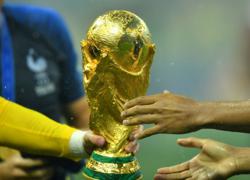