STRASBOURG, France (Reuters) -France were held to a disappointing 1-1 home draw by Bosnia after playing almost half the game with 10 men in a World Cup Group D qualifier on Wednesday.

Nine weeks after their shock loss to Switzerland in the last 16 of Euro 2020, the world champions had Antoine Griezmann to thank for a quick equaliser after Edin Dzeko had put the visitors ahead in the first half.

Didier Deschamps's side had Jules Kounde sent off for a rough tackle early in the second half and although they dominated possession, they had to be content with sharing the points at Strasbourg's La Meinau stadium.

France remained unbeaten in four games and lead the group with eight points, four ahead of Ukraine who were held to a 2-2 draw in Kazakhstan earlier on Wednesday.

The French next face Ukraine away on Saturday before hosting Finland next Tuesday while Bosnia, who are fourth on two points from three matches, take on Kazakhstan on Tuesday.

"It's always more complicated when you play with 10 men. But we re-organised to be more compact to at least keep the result," Deschamps said.

"Of course, that's not what we were looking for but World Cup qualifiers are hard for everyone. We have an extra point but we will be looking for two wins in our next two games."

France started with an intense pressing game, but Bosnia threatened through Miralem Pjanic and Dzeko, who opened the scoring from just inside the box with a low shot that went between the legs of Presnel Kimpembe on 36 minutes.

Dzeko's 60th goal in his 115th international was cancelled out three minutes later when Griezmann's attempted header from Kylian Mbappe's corner took a deflection off Dennis Hadzikadunic's thigh and went into the net.

A VAR review confirmed the ball had gone past the line and Les Bleus were fortunate to reach the interval level at 1-1.

It became even harder for France when Kounde was shown a straight red card after a VAR review for a brutal tackle on Sead Kolasinac five minutes into the second half.

Midfielder Jordan Veretout made way for full back Leo Dubois and although France continued to enjoy the majority of possession, they proved too clumsy in the area with Mbappe and Karim Benzema struggling to gel as a partnership.

Deschamps added fresh legs 14 minutes from time by replacing Griezmann and Benzema with Kingsley Coman and Anthony Martial, but they failed to conjure up a French winner. 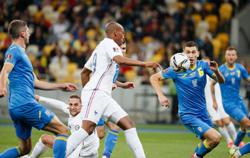