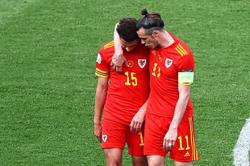 Matteo Pessina's goal gave Italy a 1-0 halftime lead and sparked fears Switzerland - who beat Turkey 3-1 in the other Group A match - could come up with the goal difference swing they needed to take the second automatic qualification spot.

Wales were forced to play the final half hour a man down after Ethan Ampadu was sent off for a stamp on Federico Bernardeschi, but Page's men battled hard to ensure the margin of defeat was not too damaging.

When asked if the result felt like a win, Page told reporters: "Of course it does. Because we've got second spot and that winning feeling.

"We knew it was going to be a tough game. We had to dig deep a lot of times. It's tough enough for 11 men but to go down to 10 it gave us an even bigger hill to climb.

"But I can't be any more prouder of the boys. They got the job done."

With one eye on Switzerland's late charge in Baku, Page described the closing stages of the match as an emotional rollercoaster.

"I didn't want to know what was going on in Baku but at halftime I was told they were 2-0 up and we were a goal behind. We knew it was about a five-goal swing," he said.

"But we can't control what happened there and kept our lads focused and motivated. Kieffer Moore came in and helped us with his physicality at the edge of the box. There were some massive performances today."

Wales can now look forward to a trip to Amsterdam for a last-16 match against the Group B runners-up on Saturday.

"I have tired men in the changing room right now. So tomorrow is going to be a recovery day," Page said. "We'll have an eye on the remaining games and let's see who we face."