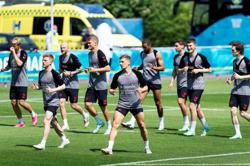 COPENHAGEN (Reuters) - Mikkel Damsgaard has been handed the difficult role of stepping into Christian Eriksen’s shoes in Denmark’s lineup while Kevin De Bruyne is only on the bench for Belgium in their Group B clash in Copenhagen on Thursday.

Damsgaard is not a like-for-like replacement for Eriksen, who suffered a cardiac arrest during Denmark's Euro 2020 opener, but he can play the playmaker role. He is one of two changes to their lineup after the loss to Finland on Saturday.

Jannik Vestergaard comes into the defence with Jonas Wind being sacrificed as Denmark changed their formation.

Coach Kasper Hjulmand said players would be free to choose whether they wanted to play after the trauma of seeing Eriksen collapse on the field against Finland.

He was given CPR on the pitch and was then rushed to hospital. He will now have a heart starter device implanted.

Denmark captain Simon Kjaer was credited with being the first to recognise Eriksen was in distress and start CPR. He is expected to get a rousing welcome when he leads out the home team.

De Bruyne suffered a double facial fracture in last month’s Champions League final and missed Belgium’s build-up to Euro 2020 as well as their first Group B game against Russia last Saturday, when they were impressive 3-0 winners.

Yet he was passed fit to play and is on the bench, along with Eden Hazard and Axel Witsel, who has 110 caps, and is expected to get some time off the bench in his first outing since a serious Achilles tendon injury six months ago.

Timothy Castagne, who suffered an eye socket fracture against Russia last Saturday and is out of the tournament, is replaced by Thomas Meunier on the right of the attack in one of two changes by Belgium coach Roberto Martinez.

The other is a straight swap at the back as Dedryck Boyata is replaced by Jason Denayer.