Go ahead Harry, make our day

Kane will be able: The Tottenham star is at the peak of his powers and burning with ambition.

LONDON: Harry Kane holds the key to England’s bid to end 55 years of hurt as Gareth Southgate’s side start their Euro 2020 campaign with a revenge mission against Croatia today.

England have not won a major trophy since the 1966 World Cup and their under-achieving history is littered with heartache and embarrassment on the big stage.

One of their more painful defeats in recent years came at the hands of Croatia, who beat Southgate’s men in the World Cup semi-finals in Russia three years ago.

But England have been revitalised under the former international defender and they go into this weekend’s Group D opener at Wembley with mounting belief they can emulate the success of Bobby Moore and company on home turf more than half a century ago.

Southgate has selected one of the youngest and most intriguing squads in the tournament, with the emergence of Phil Foden, Mason Mount and Jude Bellingham heralding a bold new era for the Three Lions.

With England playing all their group games at Wembley, which is also hosting matches in the last-16, semi-finals and final, the stage is set for Southgate’s men to make the most of home advantage.

To do that, captain Kane must stay fit and firing on all cylinders. 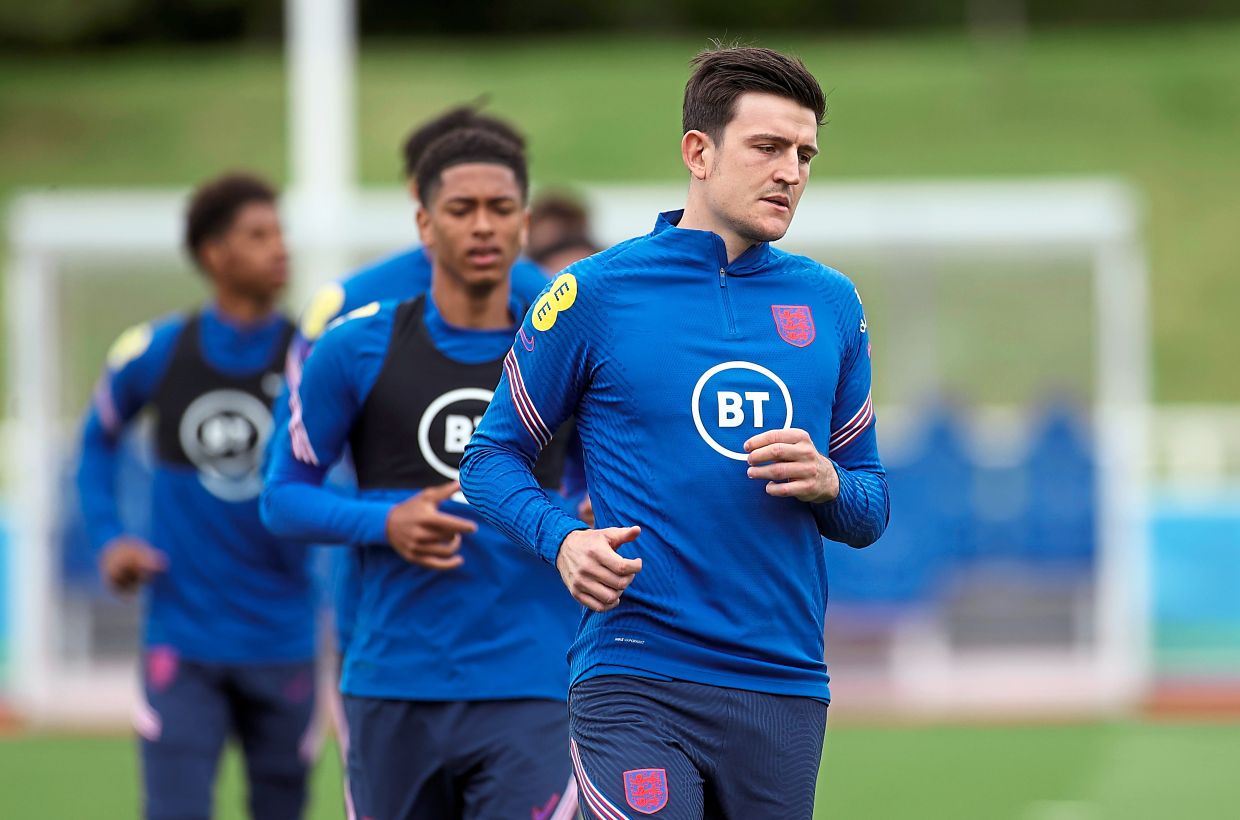 The other Harry: Centreback Maguire jogging with teammates at a training session. — Reuters

Kane finished as the Premier League’s top scorer for the third time after scoring 23 goals this season.

The 27-year-old is at the peak of his powers and burning with ambition.

No wonder he has told Tottenham -- without a trophy since 2008 -- that he wants to join a club capable of giving him the medals his talent deserves.

Kane’s transfer saga will be one of the stories of the Premier League close-season, with champions Manchester City leading the chase for the £150mil-rated (RM869mil) striker.

Focused on the team

Southgate insists Kane will be able to put aside personal ambitions for the duration of England’s assault on the European Championship.

“I think his focus is on the team. I think he is very clear on that. The individual awards and achievements are of course a very special thing and have been very richly deserved, ” Southgate said.

“But he is at that moment of his journey with us when you forget about the number of caps and goals and you are thinking about the team having success.”

Kane won the Golden Boot at the 2018 World Cup after scoring six times during England’s run in Russia.

But he looked visibly exhausted by the time England ran out of steam against Croatia in the last four.

Kane has once again suffered with ankle problems during the gruelling Covid-shortened season, raising questions about what measures Southgate will take to avoid his talisman burning out over the next month.

Southgate’s assistant coach Steve Holland recently revealed England staff have looked into Kane’s usage in Russia in a bid to avoid a similar scenario with his fitness.

“In terms of players playing all seven matches, we are going to need and will use the squad, ” said Southgate. “There is no doubt about that.