Time to get it right: Malaysia’s naturalised player Guilherme De Paula (right) has been under fire after the recent defeat to United Arab Emirates. — FAM

National coach Tan Cheng Hoe wants his players to focus inwardly rather than being disturbed by the rival camp’s psychological warfare ahead of their crucial Group G tie against Vietnam on June 11 at the Al-Maktoum Stadium in Dubai.

It is learnt that Vietnam’s eccentric South Korean coach Park Hang-seo had declared that he would quit the team if the team fail to qualify for the next round. In fact, he went further and said he was glad that he did not have to face the Malaysian fans in Kuala Lumpur.

Cheng Hoe said Hang-seo is known for his tactics of intimidating opponents.

“This is his way. We have played against him a few times and he uses mind games to get to the opposing team. It’s best that we ignore him and focus on our game, ” said Cheng Hoe.

On paper, Vietnam indeed look superior, as they have beaten Malaysia four times and drew once in the last five meetings. Cheng Hoe is unperturbed over the past results.

“I don’t see it as an added pressure. It’s a challenge for me, as every coach wants to get a positive result, ” said Cheng Hoe.

“We’ve never won against Vietnam, especially under Hang-seo. Vietnam defend well as a unit. We need to find a solution to counter.

“It won’t be an easy game. We just need the confidence. Their pattern of play never changes, so we’ll prepare.”

Cheng Hoe’s main task now is to boost the players confidence as they have been down after their demoralising 4-0 defeat against United Arab Emirates. Their naturalised players, especially strike Guilherme De Paula, have been under fire.

“Many felt that we need to make drastic changes after the defeat but we still have four days to prepare. De Paula is disappointed and sad after the game but I believe, he is experienced enough to overcome this setback, ” added Cheng Hoe. 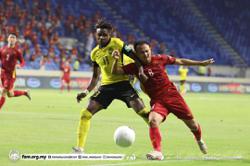