(Reuters) - Liverpool manager Juergen Klopp has played down his side's top-four chances and said winning their five remaining Premier League games might not be sufficient to secure a Champions League spot for next season.

Liverpool stormed to the Premier League title last season but a campaign marred by injuries and poor form has left them seventh, seven points below the fourth and final Champions League place.

"I am not sure there is still a chance (for top four) but we will try and if there is one, we will be there for sure," Klopp told a news conference ahead of Saturday's home game against Southampton.

Klopp admitted his side had found it difficult to overcome serious injuries to the likes of Virgil van Dijk, Joe Gomez, Joel Matip and Jordan Henderson among others.

"People think it's an excuse but we lost our full defence, it felt like we broke our leg," he said. "You can limp but midfielders transformed to defenders and the spine was broke, then it's difficult to move.

"But I always try to learn. That's the plan, to use the experience for the future."

Klopp backed the right of supporters to demonstrate, but said they needed to be peaceful.

"I am a believer in democracy," he said. "I am happy for people to tell their opinion ... I heard police were injured and this should not happen. To break down doors and stuff. It was not completely peaceful and then it was not right anymore."

Klopp said captain Henderson, who has not played since late February after undergoing surgery on a groin injury, had started running again but had not yet joined team training. 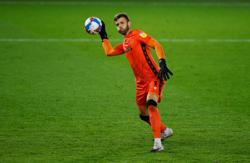