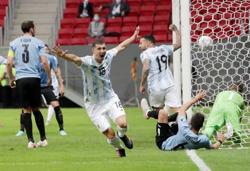 Tough opponents: Pahang’s Herold Goulon (left) believes it will not be easy against Selangor today.

PETALING JAYA: Once mighty Pahang face the ignominy of being relegated if they don’t buck up now.

Their French centreback Herold Goulon hopes the 5-0 win over basement side UiTM will spark a revival in their remaining 11 matches.

In their last 10 games before Saturday’s big win, the Elephants won only once, against Sabah (2-1), drew two and lost seven and are languishing in 11th spot with eight points.

Goulon and teammates certainly need to pull up their socks when they hosts Selangor at the Darulmakmur Stadium tonight.

Their fifth-placed opponents have lost only once in their last five matches. On Sunday, the Red Giants beat Petaling Jaya City 2-1.

“The win over UiTM gave us a huge boost in terms of confidence as we have not won in a while. The huge margin was just as important as the three points, ” said the 32-year-old, who has been with Pahang since 2019.

And Goulon knows it will be difficult to even snatch a point tonight.

“It’s going to be a different story against Selangor.

“They are much stronger and in a better position than us.

“This is the time we need to prove our mettle.

“Our target is to win the remainder of our matches.

“Right now a draw is not an option.”

However, all is not doom and gloom as Pahang have beefed up the squad with four new signings during the transfer window to face Selangor.

When asked what’s the reason behind the team’s meltdown, Goulon said: “All I can say is that everyone in the club is responsible for it, myself included.

“We need to show more character.

“We have to get back the fighting spirit that’s missing.

“It’s the only way to get out of our dire situation.”