Bayern go 10 points clear at top with win over Leverkusen 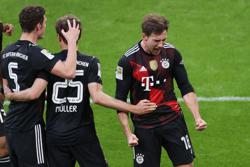 MUNICH, Germany (Reuters) - Bayern Munich eased to a 2-0 win over Bayer Leverkusen on Tuesday with two early goals to open up a 10-point gap at the top of the Bundesliga as they cruise towards their ninth straight league crown.

Bayern have endured a turbulent seven days following their Champions League quarter-final exit to Paris St Germain and coach Hansi Flick stating his desire to leave the champions at the end of the season despite being under contract until 2023.

Yet it did not take long for the hosts to score and forward Eric-Maxim Choupo-Moting, replacing the injured Robert Lewandowski, scored for the third straight game as he volleyed in to give Bayern the lead in the seventh minute.

With four games remaining, Bayern will seal the title with a win over Mainz 05 on Saturday.