Reason to shout: JDT’s Bergson yells out in delight after scoring the second goal in his team’s 2-0 win over Pahang. — Bernama

PETALING JAYA: There was no roar in the win. But the subdued Southern Tigers still proved too fierce for the Elephants on their backyard.

Johor Darul Ta’zim (JDT) trooped out 2-0 winners over Pahang at the Darulmakmur Stadium in Kuantan on Friday, with coach Benjamin Mora wishing his charges had been more aggressive.

The three points and the clean sheet, however, stopped the Mexican from complaining any further.

“Instead of saying the win was easy, I wished we could use the word better for our performance. We could have been more aggressive, but the environment right now is different because players are fasting, travelling, and they are tired, ” said the Mexican.

“I’m a coach that demands the best all the time, but sometimes we can’t score four or five goals in a game. Pahang’s young boys had nothing to lose, but we got the three points, which is good because we still stay top.

“When Pahang lost a player in the 69th minute (Ezanie Salleh was sent off after collecting a second yellow card), it got tougher because they had to be more alert and focused not to concede more; and they even created some chances.”

It was the defending Super League champions’ seventh victory of the season, and they are still unbeaten after nine matches.

JDT took the lead in the 23rd minute through Argentinian midfielder Leandro Velasquez before Brazilian striker Bergson scored his ninth goal of the season in the 93rd minute.

JDT remain top of the league with 23 points, while Pahang are 11th with five points.

Pahang coach Dollah Salleh said he was proud of his boys despite the defeat.

“The youngsters competed well in the second half. Even when we were one man down, we still fought. But when we went forward in search of goals, we suffered lapses in defence in the last few minutes, ” said Dollah. 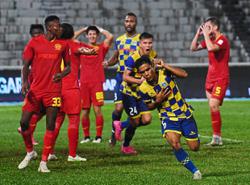 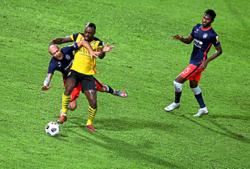