ROME (Reuters) - Italy's government has decided that Rome's Olympic stadium can be re-opened to the public for the forthcoming 2020 European Championship, the Italian football federation (FIGC) said in a statement on Tuesday.

"Health Minister Roberto Speranza has told us that the government scientific advisers will identify the best solutions to allow the presence of the public at the Olympic Stadium in Rome in June on the occasion of the European Championships," FIGC President Gabriele Gravina said.

Turkey and Italy are due to play the opening match of Euro 2020 in Rome on June 11.

The tournament was postponed last year due to the COVID-19 pandemic and UEFA, the European soccer governing body, had asked the 12 host nations to submit plans for allowing fans inside stadiums by early April. 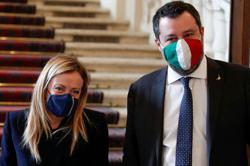