MANCHESTER, England (Reuters) - Manchester United's executive vice-chairman Ed Woodward is expecting UEFA's Champions League reforms to include a bigger role for clubs in the "governance and control" of the competition.

UEFA has been negotiating a new format for the Champions League, to be introduced in 2024, with a bigger group stage, more games and 36 instead of 32 clubs.

Woodward is a board member of the European Club Association, which represents the top clubs in UEFA and who have been involved in talks with the governing body over the reforms.

"While many details are yet to be resolved, we look forward to seeing the full final proposal from UEFA that we anticipate will include a greater involvement of clubs in the governance and control of the competitions," Woodward told a conference call with investors on Thursday.

The reform negotiations have been carried out against the backdrop of renewed talk of a breakaway European Super League, with reports suggesting United had been involved in such talks.

United have not commented on those reports and Woodward has consistently stated that he has been focused on the official talks with UEFA through the ECA.

A breakaway would have led to an entirely club-run structure but critics said it would have increased the power and wealth of an elite of clubs and risked damaging the value of domestic competitions such as the Premier League.

The ECA will hold its general assembly on Monday and is expected to outline its position on the reform proposals which have been questioned by bodies such as the European Leagues organisation.

Woodward said the new format would have "greater appeal to fans, and...crucially, will continue to go hand in hand with thriving domestic leagues".

His comments indicate that UEFA's reforms are broadly being welcomed by the elite clubs in Europe and should further reduce the likelihood of a breakaway occurring.

Manchester United Plc said its total revenue rose 2.6% in the last three months of 2020 despite impact of the coronavirus pandemic, helped by strength in broadcasting.

"The rapid rollout of vaccines in the UK and beyond gives us confidence that we are now on a path towards normality, including the return of fans to stadia," Woodward said.

Woodward said that international rights revenue for Premier League television deals was likely to compensate for any flattening of the domestic rights market.

"The way we thing about growth is likely to be with lower rated growth in UK rights sales but set-off by big growth on international side," he said. 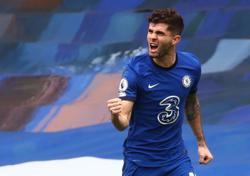