Liverpool, who beat Leipzig 2-0 in the first leg on Feb. 16 in the Hungarian capital, cannot host Leipzig at Anfield because the Bundesliga team would have to undergo 10 days of isolation upon returning from the United Kingdom.

The first leg, originally scheduled to be held at the Red Bull Arena in Germany, was shifted to Budapest after German authorities denied Liverpool entry into the country due to COVID-19 protocols.

The second leg will now be held at the Puskas Arena on March 10.

"UEFA is able to officially confirm that the UEFA Champions League Round of 16 second leg match between Liverpool FC and RB Leipzig will now be played at the Puskas Arena in Budapest," UEFA said in a statement.

"UEFA would like to express its gratitude to Liverpool FC and RB Leipzig for their support and close cooperation, as well as the Hungarian Football Federation for their assistance and agreeing to stage the match." 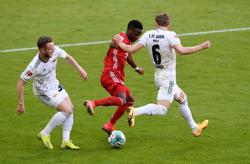