Fonte salvages a point for leaders Lille against Strasbourg

PARIS (Reuters) - Captain Jose Fonte struck late as Lille salvaged a point with a 1-1 home draw against Racing Strasbourg on Sunday to ensure they would end the weekend at the top of the Ligue 1 standings.

Fonte found the back of the net with four minutes left to cancel out Ludovic Ajorque's first-half opener and put Lille on 59 points from 27 games.

They lead second-placed Paris St Germain, who hammered bottom club Dijon 4-0 on Saturday, by two points, while Olympique Lyonnais will move within a point if they beat Olympique de Marseille at the Stade Velodrome later on Sunday.

Strasbourg are now 15th on 30 points.

Lille dominated early on but Strasbourg were more clinical and they went ahead nine minutes before the break when Ajorque volleyed home from Frederic Guilbert's cross for his 11th goal of the season.

Ajorque went close to doubling the visitors' advantage with a header two minutes later but Lille keeper Mike Maignan denied him with a superb save.

Strasbourg coach Thierry Laurey left the bench towards the end of the first half with broadcaster Canal Plus saying he was feeling unwell.

Lille upped a gear after the break, but keeper Eiji Kawashima parried a fierce strike from Jonathan Ikone to keep Strasbourg ahead.

Fonte eventually levelled with a header but Lille were not able to take all three points despite a late onslaught.

Earlier, Monaco beat visiting Stade Brestois 2-0 thanks to goals by Stevan Jovetic and Kevin Volland to claim their ninth victory in their last 10 league games.

They are fourth on 55 points but coach Niko Kovacs refused to even contemplate what he called a "podium" finish.

"Podium talk is taboo. We'll talk about it when we have enough points to secure fourth place," he told a news conference. 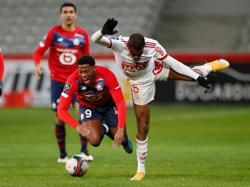