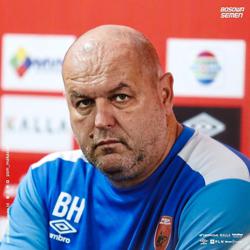 PETALING JAYA: Don’t be surprised when Anwar Ibrahim makes his appearance for Kuala Lumpur in the Super League.

No, it’s not the opposition leader from Parti Keadilan Rakyat but a young wingback from Kota Baru known for his long throw-ins and strong overlapping runs.

Anwar, who made his professional debut for Felda United four years ago, played for Selangor last year but did not make much impact as the coach then preferred Syahmi Safari.

The 21-year-old now wants to fight for the first 11 with the City Boys and can’t wait to mix with the big boys like Mohd Shukor Adan, Indra Putra Mahayuddin, Safee Sali and Hadin Azman.

“As a youngster, I want to learn from these guys and gain lots of experience from my stint here. I want to feature regularly and be consistent, ” said Anwar, a former national Under-19 player.

“My teammates have been friendly during pre-season and online training, and we constantly help each other. Also, I’ve no problems adjusting because two of my former Felda teammates, Hadin and Shukor are here.”

He is also eager to work with coach Bojan Hodak.

“I’ve trained with him when we played in the Under-19 AFF tournament in 2018 and became champions. I know what he wants and how he does his training.”

Anwar said since making his debut in the domestic game four years ago, he had seen many changes but the one that he is so happy about is seeing teams being converted to clubs.

“The game is much more organised and professional, ” he said.

“With all the changes, I want to make sure Kuala Lumpur stay in the Super League and finish top five, ” added Anwar.

With good results, he also hopes to win a place in the national team under coach Tan Cheng Hoe.