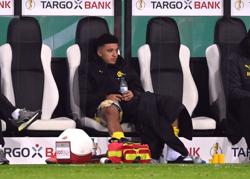 BERLIN (Reuters) - Out-of-form Borussia Dortmund's title hopes could be a distant dream by Friday night after their game at Borussia Moenchengladbach, having already dropped 10 points behind leaders Bayern Munich at the halfway mark of the season.

Dortmund slumped to a 2-1 defeat to direct rivals Bayer Leverkusen on Tuesday to lose further ground, staying fourth on 29 points and having a mountain to climb if they are to have any chances of remaining in the running for the league crown.

The appointment of former assistant Edin Terzic following the sacking of coach Lucien Favre in December has failed to yield any major returns with the team having won three of their six league games under him, and only one of their last three.

"Quality is always the result of talent plus attitude. We have been relying on talent too much and not really fought back when things sometimes did not work," Terzic said after Tuesday's defeat.

His team is brimming with young talent, with teenagers Jude Bellingham, Giovanni Reyna and Youssoufa Moukoko as well as 20-year-olds Jadon Sancho and Erling Haaland.

But they have been far too inconsistent this season, beating title contenders RB Leipzig 3-1 this month but then managing just one point from their next two league games.

"It is the way the team presents itself," Dortmund sports director Michael Zorc said. "Such body language as our players had for much of the first half on Tuesday is not tolerable."

"It is our challenge to make sure we qualify for (next season's) Champions League. We should not be daydreaming about the league title which we have never talked about."

Dortmund must now bounce back in double quick time with fellow Champions League club Gladbach having clawed their way back up the table after three wins from their last four games, including against leaders Bayern Munich.

The Foals are now in seventh place on 28 points, one behind Dortmund.

"Dortmund have failed to win their last two games and that is unusual for that team," said Gladbach's Germany international Florian Neuhaus. "We want to take advantage of the situation. We have to be very bold and earn possession because Dortmund don't like to give the ball away."

"We want to showcase our attacking football and hopefully win the game," he said. 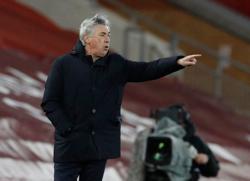