LONDON (Reuters) - Chelsea manager Frank Lampard was relieved after his side ended a three-match winless league run with an industrious 1-0 victory at 10-man Fulham while his countepart Scott Parker praised his team's character.

Lampard came under intense pressure after Chelsea's league form dropped like a stone off a cliff following a promising start, with the Blues claiming only one win in their previous six outings.

"Of course it feels good to get a win, it has not been easy with the league form recently and you have to break the duck," Lampard told Sky Sports after Mason Mount's late winner sank Fulham at Craven Cottage.

"Just because of the current form it is a bit harder, the confidence is not quite there. But we found it so I'm really pleased.

"I trust the quality of the players. There was a feeling we would get a goal, because the pressure was constant. It was about staying patient with our passing and I think we did."

Lampard pointed out Chelsea struggled against a packed Fulham defence after the home side's Antonee Robinson was sent off in the 44th minute and urged Mount to venture forward more in order to get into scoring positions.

"It is a pressure to move the ball, hit the sides, open it up, make them run and create chances. We were doing that," said Lampard.

"Mason was in a deeper role but can still arrive. He needs to score more goals, he knows that, but his quality and attitude is brilliant."

Parker praised his team's defensive effort but criticised striker Ivan Cavaleiro for missing a gilt-edged chance in the first half when the teams were still level on the scoreboard and the pitch.

"It was a great chance for Cavaleiro - that needs to go in," he told the BBC. "I thought defensively we were fantastic. You still want to be a bit of a counter-threat.

"In the second half, you're playing the clock a bit - we tried to hold on but it wasn't to be. But I've nothing but admiration for my team - they were superb to a man." 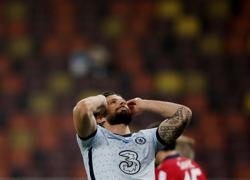 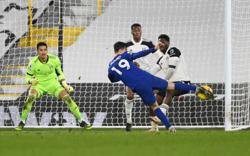