PETALING JAYA: Super League team Petaling Jaya City have announced the signing of three players and among them is former national striker Darren Lok from Terengganu.

Their president Datuk Seri Subahan Kamal believed that the inclusion of the 29-year-old Darren into P. Maniam’s squad would boost their strike force.

Subahan added that the other two are Perak’s ex-international Ahmad Khairil Anuar Ahmad Zamri and K. Prabakaran from Selangor.

“We’re quite excited to have him (Darren) and (skipper) K. Gurusamy who has been a key player for our set-up. We believe that Gurusamy and the other players that we’ve signed will be able to rise to the occasion, besides creating some surprises next season, ” he said during a press conference at the club’s headquarters here yesterday.

The England-born Darren said he was delighted to join the Phoenix and vowed to give his best for the Klang Valley outfit.

He said the lack of playing time during his one-year stint with the Turtles was among the reasons for his decision to move.

“As soon as I heard this team will be using an all-local line-up for next season, this was appealing to me.

“I’ve been in Malaysia for about five years, and I’ve seen plenty of qualities that the local players have. It’s not going to be easy as I need to work harder (to earn a place in the main squad), but I’m really excited for the new challenge, ” said Darren. 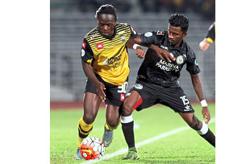