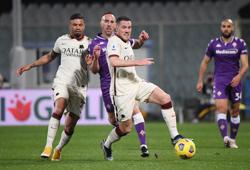 AMSTERDAM (Reuters) - A late goal from Luis Muriel earned Atalanta a 1-0 win at 10-man Ajax Amsterdam on Wednesday and sent the Italian side into the Champions League knockout stages at the expense of their Dutch hosts.

Ajax needed victory at the Amsterdam Arena to pip their Italian visitors to second place in Group D behind Liverpool but failed to create many chances as Atalanta produced an astute performance topped off by a breakaway goal in the 85th minute.

The Italian side finished the group on 11 points, four more than Ajax, who will go into the Europa League. Liverpool were top and Denmark’s Midtjylland bottom.

Ajax created only a single chance in the first half when 18-year-old striker Brian Brobbey, on his competition debut, headed into the hands of goalkeeper Pierluigi Gollini.

They found more room in a desperate last 20 minutes when a penalty appeal, after substitute Klaas Jan Huntelaar tumbled theatrically to the ground, was turned down and Davy Klaassen shot into the legs of Gollini.

"I should have scored," Klaassen said. "But it was a difficult game, they didn't come to score but defended well, they were very compact and we created too few chances."

The 78th-minute dismissal of 18-year-old midfielder Ryan Gravenberch, sent off for a second caution, then hampered home hopes.

The Italians, who only needed a draw to advance, secured the win when Remo Freuler’s perfectly-weighted ball found Muriel clear on goal and he rounded Onana to score.