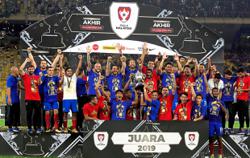 Not hasty: Kedah coach Aidil Sharin will plan his team’s challenge accordingly after the Malaysia Cup draw is made.

PETALING JAYA: Kedah coach Aidil Sharin will not give unnecessary pressure to his players by setting lofty target in the Malaysia Cup.

The Red Eagles endured a tough season but managed to finish as runners-up in the Super League to earn a berth in next year’s AFC Cup.

The players, who were embroiled in salary issues, set aside their internal problems to put on an amazing run. When the M-League resumed on Aug 28, they won six and lost just once in seven matches.

Aidil said they will plan their Cup campaign accordingly when the draw is out.

“I want to see who our opponents are so that we can plan well, ” said Aidil.

“In knockout competitions, you need to plan step by step and take one game at a time and we should not be overthinking. We did extremely well in the final stretch of the Super League and I just want the players to keep the momentum going. No added pressure as they’ve been through enough stress.

“We had a getaway in Langkawi recently and it was a good outing as we get to reconnect with the players in a relaxed environment. Every-thing have been ironed out and I believe the team’s future looks bright.”

The 43-year-old coach also quashed rumours that he will leave by signing a two-year extension.

The Singaporean said the love from Kedah fans and the concerted efforts from players and management to improve was the reason why he chose to stay.

“This season has been a really challenging one. No one could have foreseen the Covid-19 pandemic and it’s impact... the team also suffered from off-field issues but I’m glad that everything is improving.”

Aidil took charge in 2019, guiding them to fourth place in the league and were FA Cup winners.