BERN (Reuters) - FC Basel were told they could only have 1,000 fans at home matches on Wednesday while FC Sion were ordered to play behind closed doors as local authorities in Switzerland cut crowd limits at soccer matches amid a surge in COVID-19 cases.

Meanwhile, the Swiss Football League said that Basel's next match, at home to Lausanne on Sunday, had been postponed because the team were in quarantine after one player tested positive following a training session. Basel's previous match at FC Zurich had also been called off.

Although the federal government last month said that professional soccer and ice hockey clubs could have stadiums up to two-thirds full, the final word lies with local authorities who have imposed new limits. On Sunday, Young Boys Bern were also ordered to limit spectators to 1,000.

FC Basel president Roland Heri said the club, who had nearly 10,000 fans for a recent home game against FC Luzern, regretted the decision on fans, adding that they had introduced effective health measures.

"It is a stab in the heart for all football and sports fans, it hits us very hard," he said in a club statement.

"(It is) a great pity in view of the enormous efforts that were necessary to create the current protection concept. The protection concept in St. Jakob-Park was implemented in an exemplary manner by the fans in the match against FC Luzern and worked very well."

He said that the lack of matchday revenue would create an "existential" challenge for the 20-times Swiss champions.

Sion president Christian Constantin, meanwhile, told Le Matin newspaper that it would be better to suspend the league and restart with a shortened competition in the New Year.

Switzerland has recorded nearly 400 new cases per 100,000 people over the last two weeks, one of the highest rates in Europe. 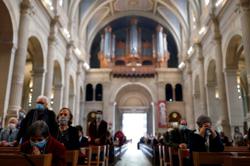