Safawi Rasid celebrates his second goal during the game against Sabah. - Photo from JDT's FB page

A double from Safawi Rasid (56th and 80th minute) and a goal each from Diogo Santo (38th) and Leandro Velasquez (84th) were enough to sink the Rhinos.

Dennis Buschening scored Sabah's only goal in the 74th minute.

The title win is much sweeter as Johor won it at the new stadium, which was opened earlier this year.

The side owned by Johor Crown Prince Tunku Ismail Sultan Ibrahim have been dominating the league since 2014, and this season, the team remain unbeaten. With one game left, it top the table with 26 points. The team are nine points ahead of second-placed Perak in the standings.

Meanwhile, Petaling Jaya City have kept their hopes of staying in the Super League alive when it beat UiTM 4-2 at UiTM Stadium in Shah Alam.

The team are now eighth in the league with 11 points. 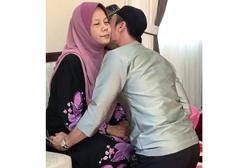 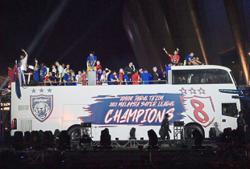