Stepping up: UiTM’s Victor Nirennold (left) will give his 100 per cent effort to avoid relegation.

PETALING JAYA: UiTM’s French centreback Victor Nirennold will be facing a familiar foe when his team take on Terengganu in a Super League match at the UiTM Stadium in Shah Alam today.

The 29-year-old Nirennold has been tasked to mark the rival team’s Mauritanian striker Dominique Da Sylva.

Da Sylva is not a stranger to Nirennold as both were on the opposing sides in the Vietnam League last season with Nirennold playing for SHB Da Nang and Da Sylva turning out for Sai Gon.

“I played against Dominique in Vietnam last season. So I kind of know him already and I know the way he plays,” said the 1.94m Nirennold.

“To beat Terengganu led by Dominique, we have to play our usual compact and hard working style.”

“I rate Terengganu highly. They have got good local and foreign players. Good coach as well. I like the way they play and keeping the ball in their possession.

Both Terengganu and UiTM have 10 points but separated by goal difference as they are fifth and seventh respectively in the 12-team Super League table.

UiTM started well when the league resumed on Aug 28 by beating Felda United (1-0) and Pahang (1-0) but lost their last game against Perak (0-1).

Nirennold admitted they were disappointed after the loss to Perak.

“We have studied why we lost and hopefully not repeat the mistakes against Terengganu. Our priority, as coach Frank (Bernhardt) always says, is to maintain our place in the Super League.”

“We just have to give 100 per cent effort and we should be able to avoid relegation.” 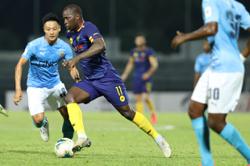 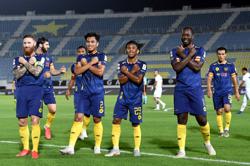