Five players to look out for when Portuguese season restarts

(Reuters) - From local talents such as Cristiano Ronaldo, Luis Figo, Joao Felix and Bruno Fernandes to South American imports including David Luiz, Angel di Maria and Ederson, the Portuguese Primeira Liga has long been a launching pad for the world's top players.

Here are five to watch out for when the top-flight resumes on Wednesday after being disrupted by the COVID-19 pandemic.

A zippy winger who can create havoc down either flank, Trincao is set for his final few games in his home country before moving to Barcelona, who have snapped him up for 31 million euros ($34.44 million).

Braga president Antonio Salvador believes the 20-year-old will go on to great things, remarking in January: "We are losing one of our great players, in fact in my opinion the best, someone who will define the next decade."

A towering centre-back with remarkable anticipation, Dias has played every minute of Benfica's league campaign this season and barely missed a game in last year's charge to the title.

Also indispensable to the Portugal team, the 23-year-old has attracted plenty of attention from the top European sides and Benfica acted quickly to tie him down to a new contract last year, raising his buy-out clause to 100 million euros.

The no-nonsense Brazilian centre-forward is the league's top scorer with an outstanding strike rate of 15 goals in 14 starts.

But the former central defender is even more impressive with his back to goal, using his powerful frame to bounce off opponents and free up space in the area for his fellow attackers.

The diminutive English winger has such grace when dribbling that his former Tottenham Hotspur coach Mauricio Pochettino once said he reminded him of a teenage Lionel Messi, although he did not progress as quickly as expected.

Edwards, now 21, had a bright spell at Dutch club Excelsior last term after an unhappy stay at Norwich City, also on loan, and is thriving since his transfer to Vitoria, with four goals and four assists in 14 league games plus two shining Europa League displays against Arsenal.

The Spanish forward is the leading scorer at Famalicao, the tiny club with big plans who made a flying start to the campaign, topping the table after five matches in their first season back in the top flight.

The 22-year-old former West Ham United player is at the seventh club of his short career but has settled well in his first season in Portugal, scoring 12 goals in all competitions thanks to his direct style of play and clinical finishing. 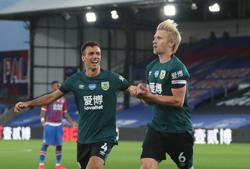 Season could be over for key Burnley pair Mee and Cork