Linz were reported to the league's disciplinary tribunal for staging team practice sessions two weeks ago when they were only allowed to be training in small groups.

The case came to light after several rival clubs said they had received videos of the practice sessions.

The club apologised at the time and said they felt it was safe to hold team sessions as the entire squad had repeatedly tested negative for the virus.

Linz were handed a 12-point deduction but all teams' points tallies are halved at the end of the regular season when they are split into two groups of six, with the top six playing for the title and the remainder to avoid relegation.

As a result, Linz's deduction was reduced to six.

The punishment means Linz, who had 27 points from 22 games before the decision and were three clear of Salzburg, drop to second place, three points behind their rivals, one point ahead of Rapid Vienna and two in front of Wolfsberger.

The league restarts on June 2 with 10 rounds of matches remaining. 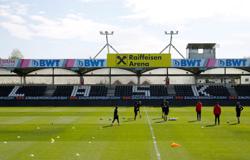