Shahrel aims to fight with imports to be top hitman

The 24-year-old national striker is the only Malaysian to have scored three goals after four matches. The others with similar feats are Kedah’s Kpah Sherman, Pahang’s Ivan Carlos and Selangor’s Ifedayo Olusegun.

The fourth import, Terengganu’s Dominique Da Sylva, leads the goal scoring chart with four goals since the league was suspended just after four games due to the Covid-19 pandemic.

Although foreign players get the nod for a regular spot in most team’s starting 11, Shahrel’s eye for goal gives him a starter’s place in the Perak line-up.

“I didn’t expect to be the only local player to be ranked second-highest scorer in the Super League with the import players but then again we are still very early in the season and I can’t be too comfortable, ” said Shahrel.

“I see Johor Darul Ta’zim’s Safawi (Rasid) as one of the local contenders in the running for the Golden Boots award but I too want to fight with the imports for the same award.”

“The coach has given me and (Guilherme) De Paula the responsibility to lead the attack and I will use the opportunity to continue scoring and retain my spot in the starting line-up.”

The last local player to win the Super League Golden Boots is Abdul Hadi Yahya who fired in 20 goals with Terengganu in the 2011 season. After that, the following eight seasons saw foreigners dominating the top charts.

Perak are currently second in the 12-team Super League standings with eight points after four matches and the only unbeaten team besides leaders JDT, who have 10 points.

The M-League is currently suspended indefinitely since March 16 by the Malaysian Football League following the movement control order issued by the government to stem the Covid-19 pandemic.

Shahrel said maintaining his team’s unbeaten streak will be crucial once the league resumes. Perak’s performances have always been topsy turvy and maintaining consistency is something which is not easy to achieve.”

“I really hope we can continue our good start and keep up the unbeaten streak.

“It doesn’t matter if we draw and only get a point. We must try not to lose matches.” 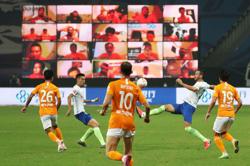