BERN (Reuters) - Professional footballers often live alone in a strange country, far from their families and work in a high-adrenaline profession where they can be heroes one day and forgotten the next.

Not surprisingly, they are prone to mental health problems and the global players' union FIFPRO says the uncertainty caused by the novel coronavirus crisis will make that worse, with women especially vulnerable.

"We have, from studies over the years, seen there are elevated risks for anxiety and different psychological problems for players compared to the general population because it's a tense and precarious employment for most of them and (this) makes it worse."

Football around the world has been brought to a standstill by the pandemic with domestic leagues put on hold and the Euro 2020, Copa America and Olympic soccer tournaments postponed for one year.

Top players have come under pressure to accept wage cuts to help their clubs through the stoppage, however FIFPRO says this is not an option for many outside the biggest leagues who often struggle to make ends meet.

"We have many young individuals who are on their own, away from their home countries, they often have no family support in these countries and many of them literally have one-year employment contracts," said Baer-Hoffmann.

"That creates enormous distress about whether they will have any kind of income coming in at the end of this season."

In a survey published in 2015, FIFPRO found that 38% of active players and 35% of former professionals faced depression or anxiety problems at some stage.

One issue at the moment, FIFPRO says, is that players are usually focused entirely on their profession and may find themselves with a void when they have no matches to think about.

In a bid to help the players, FIFPRO has published advice under the title "Keep your mind sharp".

It remind them to maintain a healthy lifestyle and sleep patterns, stay connected via social media, follow a routine and take breaks, such as listening to music or watching a favourite TV show.

It advises players to "focus on what you can control as we sometimes fixate on events outside of our control."

Players should follow the news, it adds, but not too much.

"Avoid reading everything on COVID-19 in the news or on social media because this can unnecessarily amplify stress or worry," it says.

Some national players' unions, meanwhile, have set up hotlines to help their members.

Baer-Hoffman said women players might struggle more as their living conditions were often inferior to those of male players.

"They are on their own, sitting in a small apartment that the club is providing with hardly any social interaction or family support nearby and that creates enormous pressure mentally," he added. 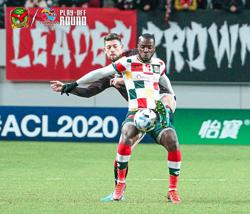