PETALING JAYA: National football teams worldwide must have continuous competitions throughout the year to stay in prime condition.

It’s no different for Malaysia’s national team. But the Covid-19 pandemic has disrupted the Harimau Malaya’s plans in their bid to qualify for the World Cup 2022-Asia Cup 2023 tournaments.

The pandemic has forced almost all countries to halt football activities and most regional football governing bodies have suspended their qualifying tournaments.

FIFA and the Asian Football Confederation have agreed that the 2022 Qatar World Cup and 2023 Asia Cup qualifying matches, originally scheduled for March 23-31 and June 1-9, be postponed to October and November.

National coach Tan Cheng Hoe said Malaysia are not the only country affected by the disruption.

But instead of lamenting, he said it is time for the country and the whole world to pray and adhere to the guidelines set by the authorities.

“Definitely, when you have a long layoff, your momentum and performance would be affected. It’s not easy as this is an unprecedented situation, ” said Cheng Hoe.

“Once competitions resume, the schedule will be tight and we will see players battling with injuries and fitness. That is part of the game.

“Right now, I’m just praying that things would subside and I pray that my players will return without any problems. Physically they should be fine as their clubs have provided them with daily training programmes.

“I also monitor their social media accounts and have called some of them to remind them the importance of self-discipline.

“Once the qualifying dates are confirmed, I am sure the players know what is expected of them.”

For Cheng Hoe, despite being home with his family in Penang, his mind is not far from football.

“Apart from spending time with my family, my daily routine never changes. I wake up, read the news, watch some sports, analyse videos of our previous international matches and do some light workout.

“I will also speak to the other coaches in the national team.”

National team won’t be in good shape when qualifiers resume 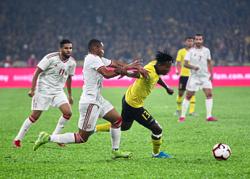 Harimau Malaya get boost before hunt for glory in Dubai