BERLIN (Reuters) - Bayern Munich coach Hansi Flick has agreed a contract extension to 2023, making his position permanent after he took over in an interim role earlier this season, the club said on Friday.

"The team has had a very good development under him, plays attractive football which is reflected in results. We are the only club still competing in all three competitions."

Bayern lead the Bundesliga and are also in the German Cup semi-finals and the Champions League last 16.

The 55-year-old Flick took over in November, replacing Nico Kovac, and after some initial wobbles re-established Bayern's domestic dominance, putting them firmly back in the running for a record-extending eighth straight league title.

The softly-spoken Flick is a former Bayern player who was assistant coach with Joachim Loew's Germany team from 2006-2014 before becoming the national federation's sports director.

He quickly managed to transform Bayern within just a few weeks after the club had dropped down the pecking order under Kovac earlier this season and risked missing out on the title they have dominated for much of the past 10 years.

"I am delighted to continue the task together with my coaching team and the players," Flick said. "I am convinced that together we can win a lot."

Bayern are four points clear of second-placed Borussia Dortmund in the Bundesliga, which has been suspended due to the coronavirus, and have reached the German Cup last four where they are due to face Eintracht Frankfurt.

The Bavarians also won their Champions League last 16 first-leg match at Chelsea 3-0 but the return game has been postponed due to the virus.

The Bundesliga is suspended until at least April 30 with officials saying any resumption would most likely involve games played without spectators. 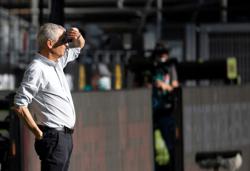