PETALING JAYA: Track cycling coach John Beasley has been busy plotting his charges’ path to success since their arrival in Tokyo.

The Australian and riders Azizulhasni Awang, Mohd Shah Firdaus Sahrom arrived in Shizuoka on Monday and got a feel of the track at Izu Velodrome three days later.

Azizul and Shah Firdaus start their medal quest in the sprint from Aug 4-6 and then the keirin from Aug 7-8.

Beasley does not want to over complicate things before the competition and prefers to keep his boys relaxed.

“We just continue to do a couple of tactical sessions each day, around 30 minutes in the morning and the same again in the evening.

“We don’t do much more than that because we have done plenty in the lead-up,” said Beasley.

“All preparations have been done, so there’s nothing to fine-tune now.

“We just need them to rest as much as possible so that we can get maximum gains.

“Our last hard session was done back in Kuala Lumpur, we always fly into a major competition 10 days before and just touch up on the power every couple of days.”

Beasley said the riders are in the best form of their life and conceded that although there’s not much he can do at this stage, he assured that they will be fast.

“I’m confident we have done everything possible to get the boys to the start line, now it’s up to them to execute well on race day,” he added.

In Tokyo, Azizul will be the first Malaysian cyclist to ride in four Olympics while Shah Firdaus will be making his debut.

Azizul, who won a bronze in keirin at Rio 2016, will be up against some illustrious names such as Australia’s Matthew Glaetzer, last year’s world champion Harrie Lavreysen from Holland and Britain’s defending triple champion Jason Jenny. 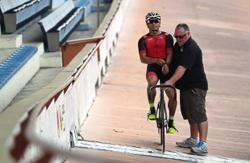