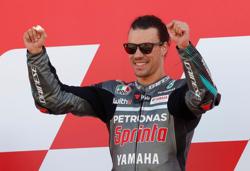 TOKYO (Reuters) - Had it not been for her horrific crash at the world championships at Imola 10 months ago, the obvious question ahead of Wednesday's women's Olympic cycling time trial would have been who will come second behind American Chloe Dygert.

The 24-year-old knows only one way to ride: dial up the power to 10 from start to finish and empty the tank.

The 22 km blast starting and finishing at Fuji International Speedway also looks tailor-made for a rider who took the discipline to a new level at the 2019 world championships.

On a stormy day in Yorkshire, England, she went 90 seconds faster than reigning Olympic road champion Anna van der Breggen over a 30 km course, with one commentator remarking that "even the TV helicopter can't keep up with her."

A few months later Dygert switched back to the track, breaking her own 3 km individual pursuit record twice in one day to take gold, before leading her team to a team pursuit gold, outclassing Olympic champions Britain in the final.

But she was stopped in her tracks in Imola.

There, as in Yorkshire, she was blowing the field away and was 26 seconds ahead at the middle checkpoint. Then she wobbled going into a corner on a descent and hurtled into and over a steel railing and down a bank.

She suffered a broken hand, but more worryingly, sustained an open wound from mid-thigh to knee. The damage was so gruesome that TV cameras cut away from the scene.

The injury was not career-ending but Dygert now has a scar like a shark bite as a grisly souvenir.

The question of whether she has the same searing pace was answered at the recent U.S. nationals when she beat three-time champion Amber Neben by 27 seconds - a record margin of victory.

Dygert was part of Sunday's road race but her focus has been squarely on the time trial, and then the track.

Should she outpace the likes of world champion Van der Breggen and Annemiek van Vleuten, Dygert will claim the medal her coach Kristin Armstrong took home for the last three Olympics.

She will then switch her attention to the velodrome where she hopes to end Britain's domination in the Olympic team pursuit.

It's a juggling act she enjoys and says pays dividends.

"As an athlete, doing the strength work on the track with those big gears, those big efforts, that's what makes me the time trialist that I am," Dygert, who won a silver in track team pursuit in Rio, told Reuters at last year's worlds.

The Dutch can only hope Dygert is not yet at full throttle after her accident. If she is, they are in trouble.

"I don't love cycling a bike. I thrive on winning and love to win. I don't race to podium, I race to win," Dygert said.