TOKYO (Reuters) - Austrian Anna Kiesenhofer caused one of the biggest shocks in Olympic road racing history with an audacious victory in the women's race as the Dutch favourites paid for a tactical meltdown on Sunday.

The 30-year-old Kiesenhofer was allowed to build up a lead of around 10 minutes in a five-rider group that escaped right at the start of the 137km route into the hills west of Tokyo.

She then went solo on the approaches to the Fuji International Speedway circuit with around 40km remaining as the favourites, including reigning world and Olympic champion Anna Van der Breggen, failed to organise a proper chase.

In searing heat, the Austrian time trial champion kept her head down and powered around the undulating curves to protect her advantage in tenacious fashion.

As she ticked off the kilometres Kiesenhofer was clearly suffering and the only fear was that she might cramp after putting in such a monumental effort.

Her earlier escape partners Anna Plitcha of Poland and Omer Shapira were eventually caught by the pack in the closing stages. Kiesenhofer kept glancing over her shoulder and looked almost shocked to see no orange-clad Dutch riders in sight.

She held firm to claim a wildly-unexpected gold medal and after getting off her bike she collapsed on to the tarmac, crying tears of joy and gasping for air.

Dutchwoman Annemiek Van Vleuten, who had tried to launch an attack earlier in the race, was second with Italian Elisa Longho Borghini third for the second successive Olympics. 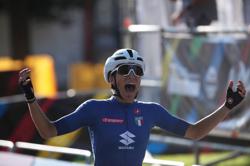