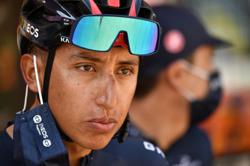 (Reuters) - Slovakia's Peter Sagan finished off the job done by his Bora-Hansgrohe team as he claimed victory in the 10th stage of the Giro d'Italia on Monday.

The triple world champion outsprinted Colombian Fernando Gaviria at the end of a 139-km ride from L'Aquila to Foligno after his team's acceleration on a climb had shaken off some of the top contenders for the final sprint.

Colombian Egan Bernal, who took the overall lead on Sunday, retained the Maglia Rosa with a 14-second lead over his main rival Remco Evenepoel after both went toe-to-toe for bonus seconds at the intermediate sprint.

Bernal and Evenepoel battled it out for bonus seconds at the intermediate sprint with the Colombian's Ineos-Grenadiers team mate Jhonatan Narvaez getting in the mix to deny the Belgian prospect first place.

Tuesday is the race's first rest day in Perugia. Azizul, Shah Firdaus in ‘quarantine centre’ before final lap of prep
Cycling-France's Bardet to skip Tokyo Olympics
Motorcycling-KTM's Oliveira powers to victory in Barcelona thriller
Motorcycling-Quartararo fastest in Catalunya for fifth straight MotoGP pole
Cycling-Giro d'Italia champion Bernal tests positive for COVID-19
Cycling-UCI confirms women's Tour de France to return in 2022
It’s a tough cycle to endure, but Azizul’s all for it
Motorcycling-Remy Gardner to move up to MotoGP in 2022 with Tech3 KTM
Cycling-Cool and composed Bernal claims victory in Giro d'Italia
Olympics-bound Azizul does his job by urging others to get a jab