Azizul and Shah to get Covid-19 jabs in June

The Malaysian National Cycling Federation (MNCF) president Datuk Abu Samah Wahab said the jabs must be administered immediately upon their arrival in Malaysia before they depart for Tokyo to take part in the Olympic Games this July.

He said both cyclists were among 85 racers who have been listed by the MNCF to receive the vaccine.

‘’(However), we will wait for a notification from the National Sports Council on when they will be given the shots, ’’ he said yesterday.

Azizulhasni and Shah Firdaus are now in Melbourne undergoing training for the Tokyo Games.

Abu Samah added that all the 35 national cyclists are part of 4,000 athletes and officials prioritised to receive the vaccines as announced by the Youth and Sports Minister Datuk Seri Reezal Merican Naina Merican on Saturday.

Azizulhasni and Shah Firdaus are expected to depart for Tokyo five days before the cycling events raise its curtain on Aug 2.

Meanwhile, Abu Samah was impressed at the encouraging performances shown by both cyclists who scored a 1-2 finish in the sprint event at the Elite Track Cycling Championship in Victoria, Australia, on Sunday.

‘’We hope they can maintain this momentum until the Olympics.”

The Games is scheduled to take place from July 23 to Aug 8. — Bernama 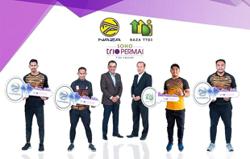 Cycling: Cavendish backs Jakobsen to return to best form after crash
Shah steals thunder from Azizul in Victorian keirin race
Not Jos-tling for it
Azizul and Shah Firdaus all set for ‘experimental’ outing
Giro d'Italia route should favour specialist climbers
Cycle of discovery
TSG stay on right track with another win
Cycling: Froome draws inspiration from NFL's Brady, eyes fifth Tour title
Harrif gets it ride in Turkey
You can’t lock him down