Fadhil Zonis romped to gold in the sprint and silver in the keirin at the Bendigo Bank Insurance Invitational in Tasmania.

NILAI: Azizulhasni Awang may be dwarfed by the towering Dutchmen Harrie Lavreysen and Jeffrey Hoogland when they clash at the Olympic Games but trust the Malaysian to walk tall.

That’s the confidence Mohd Fadhil Zonis has on his illustrious teammate.

Fadhil believes Azizul has every chance to win although Lavreysen and Hoogland, the former BMX riders, will head to the Tokyo Olympics as the ones to beat.

“The Dutch cyclists are tactically very good and their thigh muscles are much bigger, so they are putting more power into their sprints, ” said Fadhil.

Lavreysen and Hoogland showed they were the dominant force at the Track World Cycling Championships in Berlin early this year when they made it a 1-2 finish in the sprint final.

Lavreysen, only 23, also won the keirin race ahead of Japan’s Yuta Wakimoto and Azizul.

Azizul also impressed in the sprint by setting a new Asian record of 9.548 seconds en route to picking up a bronze. It was his first medal at the world championships in sprint since he claimed silver in the 2009 edition in Poland.

“The Olympics is eight months from now and I think Azizul has the chance to win if he gets everything right on the day.”

Azizul, bronze medallist in Rio de Janeiro four years ago, will be making his fourth appearance in Tokyo next year and he will be joined by debutant Mohd Shah Firdaus Sahrom, who will also compete in the individual sprint and keirin.

“The Olympic-bound cyclists have been working on physical conditioning for some time under coach John (Beasley). They will show up in Tokyo with the best preparation, ” said Fadhil.

“He’s very focused and will not let anything distract him.

“Shah Firdaus and I have learnt a lot in training and going to competitions with him, ” he said.

Yesterday, Fadhil won the sprint event in the in-house track cycling meet in style at the Nilai Indoor Stadium.

Fadhil, who also holds the Asian record for 1km time trial, did not return to join his teammates at the Melbourne training base bacause his Australian visa had expired and he did not manage to renew it before the lockdown in March. 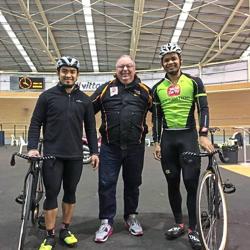