KOTA KINABALU: Cyclists from 21 teams, including one Union Cycliste Internationale (UCI) World Team, will be fighting for honours at the 25th Le Tour de Langkawi (LTdL), making it a world-class race despite earlier fears that the coronavirus outbreak may cast a large shadow over it.

Big names likes former champions – TSG’s Artem Ovechkin, Italian Paolo Lanfranchi and Colombian Jose Serpa – will all be the frontrunners for the yellow jersey in the race. Ovechkin has set his sights to be the only third rider in the race’s history to win the overall crown twice after Lanfranchi who won in 1999 and 2001 and Serpa who took the title in 2009 and 2012.

The teams were officially introduced in a ceremony at Padang Merdeka here as all 21 teams, made up of UCI World Team NTT Pro-Cycling, five Pro teams, 14 Continental and one national team were presented in the ceremony,

The Tour makes its return to Sabah and Sarawak after a long hiatus, setting another milestone with a new status as a ProSeries race.

The competition begins today with the 90km Malaysian International Criterium race, ahead of the race proper which starts with Stage One in Kuching tomorrow.

“It is my fervent hope that we can elevate Le Tour de Langkawi from a prestigious cycling event into a race with a strong identity and brand that will last for another 25 years,” he said.

Dr Mahathir expressed hopes that LTdL would become like some of the world’s Grand Tours such as Giro d’Italia and Tour de France which see fans plan years ahead and take long flights to Italy or France to experience the race and the country.

“I believe this is achievable. Already, our cyclists are of world-class, but we must also capture the imagination of cycling enthusiasts and their communities,” said Dr Mahathir.Youth and Sports Minister Syed Saddiq Syed Abdul Rahman, LTdL Chief Operating Officer Shahaizereen A. Hamid and Petronas vice-president were present at the ceremony.

Syed Saddiq said cycling had a huge estimated audience of about 3.5 billion mainly in Europe, North America and China.

“This year’s edition will be shown to hundreds of millions via live broadcasts across the world.

The race will also be seen by hundreds of millions of TV viewers in China, where it is widely-promoted over popular digital platforms including WeChat and Weibo, as well as the organisers’ YouTube Channel. It’s money in the bag for Tour winners 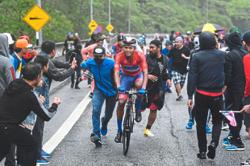 Positive cycle on the horizon for Aiman Nothing more satisfying for Harrif than to be back riding