Cricket-Pakistan hold nerve to edge out England in fifth T20

(Reuters) - Moeen Ali's late rally was in vain as Pakistan produced a spirited bowling display to beat England by six runs in the fifth Twenty20 in Lahore on Wednesday and take a 3-2 lead in the seven-match series.

Chasing a modest 146, England needed 15 off the final over but debutant Aamer Jamal (1-13) held his nerve against the experienced Moeen (51 not out) to close out the game for Pakistan.

England never got going in their chase, losing both openers early before Dawid Malan chipped in with a dogged 36 and Moeen kept them in the hunt with a few late blows but the England captain left himself too much to do in the last over.

Haris Rauf (2-41) shone with the ball and five other Pakistan bowlers picked up a wicket each.

After being asked to bat, Pakistan's middle-order woes returned to haunt them as they crumbled to 88-6 after excellent spells from Mark Wood (3-20) and David Willey (2-23).

The in-form Mohammad Rizwan (63) struck another half-century and combined with the lower order to push Pakistan towards a respectable total as the home side were bowled out for 145 in 19 overs.

England effected two run outs and Sam Curran was also among the wickets with figures of 2-23.

The teams meet again at the same venue on Friday. 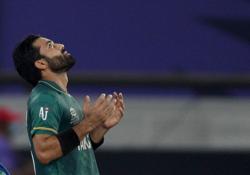