NEW DELHI (Reuters) - The Indian Premier League (IPL) will have an extended 10-week window in the next international calendar to allow all the world's top cricketers to participate in the popular Twenty20 competition, a top Indian board official told Reuters.

Board of Control for Cricket in India (BCCI) Secretary Jay Shah also told Reuters that there are no immediate plans to add more franchises to the 10-team competition and that any future additions must not dilute the quality of the product.

"We are in discussions with the ICC (International Cricket Council) and several other cricket boards to have an exclusive window for the IPL," Shah said.

"Let me assure you that there will be a two-and-a-half-month window in the next ICC FTP (Future Tours Programme) calendar so that all top international players can participate.

"Since this tournament benefits all ... we have received a positive response from the ICC and other member boards," Shah added.

The IPL is currently played out over two months, during which time international cricket effectively comes to a halt. The league will go from the current 74 matches per season to 94 in 2027.

The governing ICC is likely to discuss the 2024-2031 FTP calendar next month.

The world's richest board saw their coffers boosted by $6.2 billion earlier this month from the sale of the Twenty20 league's media rights for the next five years.

This year's IPL featured two new franchises and one of them, Gujarat Titans, beat Rajasthan Royals in front of 100,000 fans in the May 29 final in Ahmedabad.

Gujarat and Lucknow Super Giants paid a combined $1.7 billion to join the league, which would remain a 10-team affair "for now", said Shah.

"Expanding the IPL further will depend on many factors like expanding the talent pool with no compromise on quality of talent, strengthening grassroots, building the right infrastructure and many other factors," he said.

"The BCCI remains committed to international cricket and it's not just the marquee series like India v England or India v Australia," he said.

"We want to design a comprehensive calendar where we aim to help associate nations with consistent and regular bilateral tours." 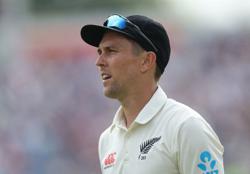