(Reuters) - The women's cricket World Cup qualifying tournament in Zimbabwe has been abandoned after the discovery of a new COVID-19 variant in South Africa that prompted travel curbs, the sport's governing body (ICC) said on Saturday.

The detection of the new coronavirus variant called Omicron in South Africa forced a number of countries to tighten border controls and impose curbs on travel from several southern African countries, including Zimbabwe.

The ICC took the decision after Saturday's game between the West Indies and Sri Lanka was called off when a member of the Sri Lankan support staff tested positive for COVID-19.

"We are incredibly disappointed to have to cancel the remainder of this event," Chris Tetley, the ICC Head of Events, said in a statement https://www.icc-cricket.com/news/2372416.

"But with travel restrictions from a number of African countries being imposed at such short notice, there was a serious risk that teams would be unable to return home.

"We have explored a number of options to allow us to complete the event but it isn't feasible and we will fly the teams out of Zimbabwe as soon as possible."

Bangladesh, Pakistan and the West Indies will progress to next year's World Cup in New Zealand by virtue of their rankings, the ICC said. They will join hosts New Zealand, Australia, India, England and South Africa.

"We are disappointed for all the players and teams who are in Zimbabwe at the moment, but from a health and safety perspective this is the correct decision," said Richard Holdsworth, High Performance Director for Cricket Ireland.

South African sport began to shut down on Friday as the travel bans forced rugby teams and golfers to scramble to try to leave the country. 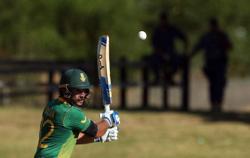