Theekshana, 21, who missed the win against Bangladesh due to a side strain, made his international debut only last month but has quickly established himself as a much-feared mystery bowler, drawing comparisons with former Lankan spinner Ajantha Mendis.

Spin proved to be Australia's undoing in the 4-1 series defeat by Bangladesh in August, with the tourists struggling on pitches not too dissimilar from the ones seen in the United Arab Emirates so far.

"He (Theekshana) is a quality bowler. I think we've also got to -- he's a mystery bowler... tactically we do study our opposition. We obviously have studied Australia," said Arthur.

"We had a series not so long ago when I was with Pakistan here against them where we did use spin quite successfully. So hopefully that works. If you haven't seen Maheesh, he certainly poses some questions."

"He has a couple of different balls that do make you quite hesitant if you can't pick them. So, look, it will be an interesting contest tomorrow."

Australia scraped past South Africa in their opener at the weekend, with a win for either side on Thursday likely to be crucial in the race for the semi-finals.

Arthur added that his team did not have much to lose after coming out unscathed in the qualifiers and that they were confident of beating anyone on their day.

"The players have been outstanding. And we just are improving. For us, it's about our journey. It's not a sprint... the qualifiers were tough. There was a lot of pressure on us there. Now the pressure is reversed," he said.

The coach was full of praise for Charith Asalanka, whose superb knock led the way against Bangladesh.

"To see Charith's development has been incredible. I remember him arriving in our bubble just before we went to England... and to see Charith's journey from England to where he is now is a credit to himself," Arthur added. 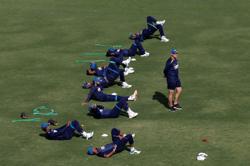