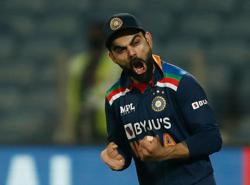 (Reuters) - India captain Virat Kohli defended the spin-friendly pitch in Ahmedabad after his team's 10-wicket victory over England inside two days of the third test on Thursday.

Spinners from both sides wreaked havoc on the surface where 30 wickets fell in two days, 17 of them in Thursday's first two sessions of the day-night match.

"It was a very good pitch to bat on, especially in the first innings," Kohli said after India went 2-1 up in the four-test series.

"We felt like the ball was coming on nicely with the odd ball turning but it was below-par batting from both teams.

"Our bowlers were much more effective and that's why we got the result."

Left-arm spinner Axar Patel was adjudged man-of-the-match for his haul of 11-70.

Kohli pointed out that most of the batsmen fell to deliveries that did not turn.

"It was bizarre that out of the 30 wickets, 21 were off straight balls," he said.

"I feel that's just lapse of concentration or indecision or too many things going on in your head as a batter when you are playing for the turn but getting beaten on the inside.

"It was the classic example of batsmen not applying themselves enough, and maybe that's why it was such a quick game."

"Getting 400 is an outstanding achievement, and still so many games and years to go for India," Kohli said.

"In test match cricket, he is surely a modern legend and we're just lucky to have him in our team. As a captain I am so pleased he plays for us." 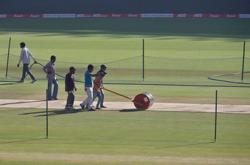