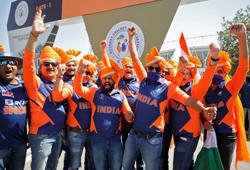 (Reuters) - A rain-storm delayed the resumption of the fourth test between Australia and India in Brisbane after tea on day two on Saturday.

India were 62 for two at the teabreak, in reply to Australia's first innings 369 in the series-decider at the Gabba.