'I was loving it!' Pucovski makes his mark in the baggy green

SYDNEY (Reuters) - Australia's Will Pucovski waited a long time to make his test debut but he delivered at the first time of asking with a half century in the third test against India at Sydney Cricket Ground on Thursday.

The 22-year-old, his shaggy hair bulging out from beneath his helmet, certainly rode his luck but his 62 was the best return for an Australian opener in the series so far and helped his side into a strong position at the end of day one.

Pucovski was called up to the test squad on the back of two double centuries for Victoria in Sheffield Shield only to be struck with a ball to the helmet playing against the tourists for Australia A in December and suffering a concussion.

A series of concussions have plagued his career and, he believes, contributed to mental health issues that have twice forced him to take time off from the game when on the cusp of test selection.

After finally passing the health protocols, Pucovski received the cherished "baggy green" cap on Thursday morning, however, before being sent out to open.

"It was a pretty incredible experience, it meant everything to be honest," he told reporters.

"It's been quite surreal, it's been a rollercoaster. I feel like I've seen about a million doctors but I got through the protocols and I'm very happy to be here."

Looking compact and assured, he scored 14 in the first seven overs before the rain descended, resuming with the same composure four hours later when the skies cleared.

He looked less comfortable facing Ravichandran Ashwin and looked set for an exit on 26 when edged the India spinner behind only for wicketkeeper Rishabh Pant to drop the ball cold.

"The way Ashwin used the seam and his variations was something I hadn't seen before," he said.

Pucovski had added another six runs to his tally when he got another life, gloving the ball behind to give Pant a chance to redeem himself.

Although the wicketkeeper scurried back and leapt high to reach the ball, he was adjudged by the third umpire to have trapped it on the ground and Pucovski was recalled to the crease.

"I thought he'd claimed it so I thought he caught it, maybe I have too much faith in people," Pucovski said, explaining why he had walked.

"It was pretty cool to be called back."

A mix-up with Labuschagne as the pair went for a third run when Pucovski was on 37 left the debutant stranded at the wrong end but the throw from the Indian fielder was poor and he survived to bat on.

Making the most of his reprieves, Pucovski slapped his fourth four to the onside just before the tea break to reach the half century mark.

"I was just absolutely loving it, it was probably my favourite day of cricket yet," he said. 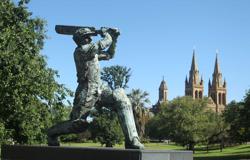