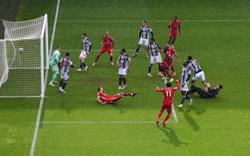 Dallas (left) and Raphinha will be Leeds’ danger men on Monday. — AP

HAVING exited the Champions League in midweek, clinching a top four finish is the only thing for Liverpool to fight for this season.

With morale at an all-time low, Juergen Klopp must rally his players as they take on Leeds United on Monday.

Liverpool will need to get rid of any negativity and focus against Marcelo Bielsa’s side. Everyone knows what is at stake at the end of the season.

Make no mistake, despite the Reds picking up three big wins in the Premier League of late, Leeds are still a dangerous team. Just ask Pep Guardiola.

Winning 2-1 against the League champions-elect while being down to 10 men surely says something about the Yorkshire side.

And the way the winning goal by Stuart Dallas was scored last week should also be a warning to Klopp and his usually high defensive line.

While good in the air, it is no secret that Nathaniel Phillips does not have the legs to match pacy attackers.

Should he be caught out during a counter attack, one can only hope that the ball does not end up in the back of the net.

Two such attackers -– Rodrigo and Raphinha -– are a doubt for the match at Elland Road, so it could be good news for Liverpool.

But on a good day, Helder Costa and Jack Harrison –- on loan from Manchester City –- are able replacements and can pose a similar threat.

Along with Patrick Bamford, they will be the danger men that Liverpool need to be careful of.

Even so, Liverpool cannot afford to sit back and must go on the offensive and try to win the game.

The passive play during the first leg of the quarter-final match against Real Madrid proved to be their downfall in the Champions League and such a subdued showing must not be repeated.

There are no further injury concerns for Klopp, so the back four should remain unchanged, with Philips, Ozan Kabak, Andrew Robertson and Trent Alexander-Arnold likely to get the nod.

Much has been said about Alexander-Arnold in the past couple of weeks after he was dropped by England boss Gareth Southgate.

Without the imperious Virgil van Dijk or Joe Gomez at the heart of their defence, it has somewhat exposed Liverpool’s defensive frailty.

The 22-year-old has responded admirably in the last few games since, including the 0-0 draw with Real Madrid in midweek.

There is no doubt about his talent, especially his skill on the ball, long passes and crosses that former Reds midfield maestro Xabi Alonso would be proud of.

If he could bulk up a bit and improve on his defensive abilities, he could even play like a box-to-box midfielder one day like club legend Steven Gerrard.

Despite having flirted with the idea of playing in Spain earlier, Mohamed Salah has continued to play his heart out for Liverpool. Though he wasted several opportunities against Real Madrid, the Egyptian was still a handful and Leeds will be wary of him.

Liverpool’s reliance on Salah to continue providing the goals now looks more urgent than ever, as strike partner and fellow teammate Sadio Mane has gone off the boil.

The over-reliance on Salah is also perhaps one of the Reds’ weaknesses this season as well.

Teams will be aware that by pocketing Salah, they will have a good chance of keeping Liverpool from scoring.

Thankfully, Diogo Jota has stepped up with the goal-scoring duties and needs to start ahead of Mane.

Roberto Firmino, who did not have a good game against Real Madrid, is starting to find his feet following a brief injury spell.

Firmino was unlucky to have his goal disallowed by VAR during the match against Aston Villa but should be starting again.

Liverpool cannot dwell too much on past results. What is more important are the remaining games ahead.

A win against Leeds will certainly do the team’s confidence a world of good.

It will be another tightly contested match like the season opener when Klopp’s side emerged 4-3 winners in a thrilling encounter.

The Reds should be good enough to collect all three points again and continue their quest for Champions League football next term.