Can City roll past Everton?

Master tactician Pep Guardiola will be aiming to point his team past Everton today. - Reuters

MANCHESTER City resume their pursuit for an unprecedented “quadruple” with a tricky quarter-final fixture at Everton today.

They also lead the English Premier League by 14 points with eight games to go and will face Tottenham Hotspur in the Carabao League Cup final on April 25.

Given the form they are in, there might not be that many betting against City pulling off

a remarkable feat when the curtain comes down on the European football season on May 29 in Istanbul’s Atatürk Olympic Stadium.

But before then, there will be much work to do to accomplish it, starting with the FA Cup tie at Goodison Park today.

A win for the blue half of Manchester looks like a formality, particularly so after the Toffees crashed to two successive league defeats in five days and City won their last three games (two in the Premiership and one in Europe).

But it may not pan out like the form book suggests.

Nonetheless, the Citizens did become only the third side to keep seven consecutive Champions League clean sheets with the Monchengladbach win, following in the footsteps of AC Milan (seven – ending April 2005) and Arsenal (10 – April 2006).

The most crucial component to this form has no doubt been Guardiola’s rotation of players.

The Man City boss has used and benched all his players at one time or another, the “A-Listers” included.

Perhaps the most telling thing about it surfaced when he said: “If you want to compete in four competitions, you have to rotate and everybody (must) be fresh – not just physically, but mentally (too).”

Therein lies City’s recipe for success. They have the deepest squad in strength in the league, and maybe Europe.

And Guardiola’s seamless rotation of players should be on exhibition again at Everton.

It is quite likely that he will have in his starting line-up today Ederson, Joao Cancelo, Kevin De Bruyne (who skippered the team in midweek), Ilkay Gündogan, Riyad Mahrez, Raheem Sterling and Gabriel Jesus.

The home side, for their part, will not be intimidated and instead look to this game as one in which they can bounce back and give notice that they should not be taken lightly.

They remain in the equation for a top four finish in the league, which would bring with it a slot in the lucrative Champions League next season.

The Toffees are in seventh spot, but only five points off fourth place, with a game in hand.

A place in the FA Cup semi-finals, or indeed the final itself, would be rich reward for Carlo Ancelotti’s squad who have proven tough opposition this term when they get things right.

Twin strikers Dominic Calvert-Lewin of England and Brazilian Richarlison have been in good form of late. They might be Everton’s leading lights as they endeavour to bring City’s bid for a unique “quadruple” to an unceremonious end, and extend their own run this season in the world’s oldest and most famous football tournament. 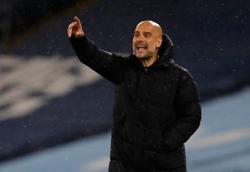