Nicholas one step nearer to European dream with new management

On course: Rolling back the years

Saujana is in good shape despite the months-long shutdown earlier.

ALMOST all local golf clubs felt the pinch when the Covid-19 pandemic set in and most are still finding it difficult to come right.

But amid the gloom, some clubs have been able to tend to their courses with enough fortitude and bring them up to scratch rather promptly, and without too much fuss.

Saujana Golf & Country Club is one such example that stands out with a tract that may be as good as any out there. This in itself is credit to the men and women who serve as the face of the club and those behind the scenes who really make it happen.

Course superintendent Mohd Razip Dahalan and general manager SA Nathan are the leaders of the Saujana force who have been able to present to their members and guests a playing experience that is worthy of a trip from anywhere around Malaysia, or indeed, outside of our borders (when Covid-19 allows it).

Razip told MetroSport that they were fortunate in that the course was in good shape prior to the lockdown, so when restrictions were eased, it did not take them too long to get things sorted out.

“We are reasonably happy with where the course is right now, especially the greens,” he told MetroSport. “But we know that we can improve further and that is what we are working on.

“This is never an easy job because you have to deal with ever-changing scenarios, like the weather, growth of weeds, intrusion of pests and continued maintenance.

“But we have a solid team working the course here and remain confident of doing our best to present the best possible course to the members and their guests,” he added.

Saujana Hotel food and beverage manager Sandeep Singh said he was pleasantly surprised when he played the Palm course recently.

“This is the first time I’m playing since before Covid-19,” said the mid-handicapper, who bombs the ball off the tee-box.

“I must say that it’s in good condition... not only the greens, but the all-round condition of the course.”

Saujana Hotel executive chef Tang Chee Keong, himself a handy player who admits to enjoying being on the greens more than anywhere else on the course, echoed Sandeep’s sentiments and said he was just pleased to be out there and being able to “enjoy a first-class venue.”

“The Palm course is more difficult than Bunga Raya (Saujana’s other 18-hole layout) in my view and it’s holding up nicely after the lockdown. It’s in good nick.

“The (Palm) greens are obviously the talking point, a process of getting them back to where they used to be and what made this course so famous.

“It’s no wonder that it’s chosen to host big international tournaments like the Maybank Championship, an event co-sanctioned by the European and Asian Tours.”

Albert Yesudian, who played in the same flight, said he had not been on the Palm in many years and enjoyed it “tremendously”.

“Given that it’s so soon after the shutdown, the Palm is in good condition and I like the true roll of the greens, even if they are fast,” he said.

The writer’s favourite hole is the par-5 13th where three-on and two putts yielded a welcome par. To get the third shot over the water to a pin position hidden behind the bunker on the left, a pitching wedge was used — with the target being the “big space” to the right of the flagstick.

When this course, with its ultra dwarf Tifeagle greens and Bermuda fairways, hosted the Maybank Championship last year, it played to a par-72, measured 7,136 yards with the 13th 523 yards.

The next hole is the Index two. It’s a 447-yard par-4 that takes no prisoners. Indeed, the 14th is a tough, uphill test that punishes anything just short of the elevated green with a steep slope that rolls everything backwards down the fairway.

On the front nine, the par-3 2nd is the club’s signature hole that measured 203 yards when Scott Hend won the Maybank Championship last season. He did it in a playoff over Nacho Elvira after both players finished on 15-under for the tournament.

For high handicappers, getting the ball over a daunting ravine is not the only obstacle of note. The green is a three-tiered putting surface — back to front — that is unforgiving in itself and depending on where the pin placement is, it can cause some serious damage to one’s scorecard.

Nathan said they were “delighted” with the recent easing of restrictions at golf courses where now the clubs could revert to twin-sharing buggies.

“I think a lot of clubs were waiting for this. And it’s not only the management teams who are happy about it, but also the members themselves,” he said.

Nathan and his team will be pleased with the feedback they have received since the reopening and hope to consolidate their position as one of the region’s top venues.

Nicholas one step nearer to European dream with new management 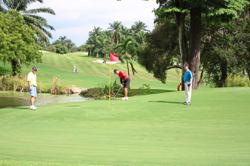 On course: Rolling back the years 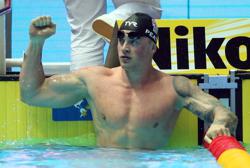