FLASH: ANTI-CORONAVIRUS LOCKDOWN CAN BE LIFTED IN FRANCE ON DEC. 15 IF DAILY INFECTIONS DROP TO BELOW 5,000, SAYS MACRON

Each race was a gruelling one-hour affair that tested the limits of the cars and the drivers.

TEAM Proton R3 dominated Round Three of the 2019 Malaysia Championship Series (MCS) with a double victory and by locking out the podium places with a 1-2-3 finish in race two.

Each race held at the Sepang International Circuit (SIC) over the weekend was a gruelling one-hour affair that tested the limits of the cars and their drivers, ultimately proving once again that R3 was the dominant team in the M-Production class.

The weekend started inauspiciously for R3 as the qualifying sessions did not go exactly as planned.

The Proton Suprima S driven by Mitchell Cheah qualified on pole position but his teammates, Fariqe Hairuman and Syafiq Ali in the Proton Iriz and James Veerapen in the Proton Saga, only managed fourth and fifth on the starting grid as the team worked continuously to find the perfect handling balance for both cars.

The Proton Suprima S driven by Mitchell dominated and took the chequered flag to give R3 yet another M-Production class victory in the 2019 championship.

The other two R3 cars ended Race One where they started, in fourth and fifth, leaving the team with a lot of work to do to for a strong finish in the second race.

Race Two was held on Sunday and with the finishing positions from Race One determining the starting order, the trio of R3 Proton racing cars started in first, fourth and fifth. 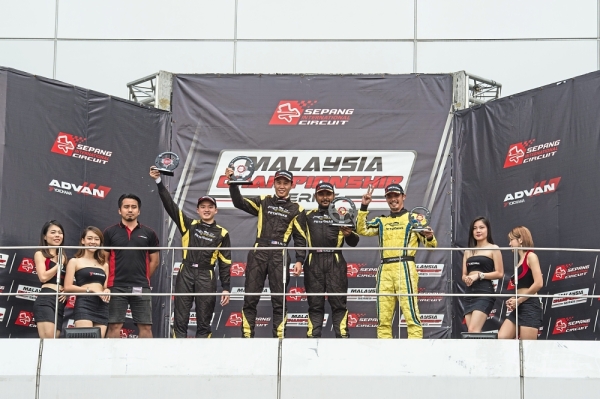 (From left) Cheah, Syafiq, Fariqe and James celebrating their achievements.

When the lights went out, however, all three cars quickly charged to the head of the field as the superior performance of the Proton Suprima S, Iriz and Saga gave the team an unbeatable edge over the competition.

By dominating Race Two, R3 gave itself a window of opportunity to maximise the points scored by their leading team.

It was the Proton Iriz of Fariqe and Syafiq that was first across the finish line followed by Mitchell in his Proton Suprima S and James in the Proton Saga.

It was the first time R3 had finished the race in the top-three positions and the result left Fariqe and Syafiq just two points behind the current leader for the M-Production class in the 2019 Malaysia Championship Series.

“Round three was a tough challenge for R3 as we strived to maximise our points haul in both races.

“The one-hour endurance race format over the weekend was a very good opportunity for us to work on the performance and reliability of our Proton racing machines and the results show we are on the right track to win the overall title,” said Proton R3 team principal Gary Lee.

“It also shows our cars will be strong during this year’s Sepang 1000KM (S1K), so it was a great effort all around,” he added.

FLASH: ANTI-CORONAVIRUS LOCKDOWN CAN BE LIFTED IN FRANCE ON DEC. 15 IF DAILY INFECTIONS DROP TO BELOW 5,000, SAYS MACRON