(Left) Lee with her parents Lucy Lim and Nicholas Lee who followed through her Wheeling for a Change project.

NOT only did Samantha Lee enjoy cycling around her neighbourhood with her parents when young, she also cycled to school.

That was the beginning of her dream but it did not materialise until early this year as she had not really put her mind to it then.

“So, I decided in June last year that I should get out and do it,” said Lee.

She then began to map out her journey to cycle around Malaysia, calculating the distances she had to cover each day and which town she would be stopping at for the night.

“My plan was to finish 5,000km within 35 days, covering Peninsular Malaysia, Sabah, Sarawak and Labuan,” she said.

Her parents volunteered to accompany her on her gruelling journey by tailing her in their Proton Saga. Lee at the Waterfront in Kota Kinabalu, Sabah.

Starting from Teluk Intan, she headed towards Tapah and then Cameron Highlands before moving on to Penang, Langkawi and Dungun in Terengganu.

She also covered Kluang and Danga Bay in Johor as well as Melaka.

“At every stop, I would stay over for a night and then begin riding again the next morning,” she said, adding that she was usually on the road again at 6am.

Her father would tail her with his headlights so she could better see the road before driving back to the hotel when the sun rises.

“He goes back to rest with my mum, while I continue on.

“They usually ‘appear’ again in the evening to assist me,” said the triathlete who had twice competed in Ironman races.

On lucky days, her parents would even meet up with her for a quick lunch along the route and pass her a snack or a cold bottle of water.

Lee said cycling on the trunk roads was a different experience altogether.

“People were puzzled as to why I was cycling alone as no one cycles there,” she said, adding that her lunch breaks were usually something to look forward to.

Most days, she receives curious stares from villagers but she was glad many were supportive of her mission.

“They would wish me luck, buy me a bowl of cendol and some even volunteered to cycle with me,” she recalled.

However, there were also times when Lee felt her body could no longer power through the humidity. 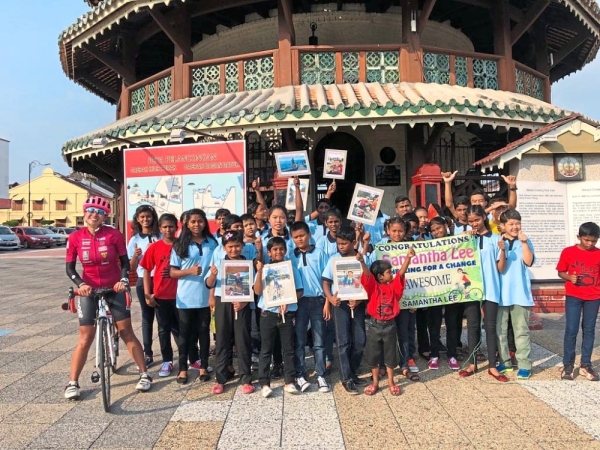 The children of Hope Mission Children’s Welfare home in Teluk Intan, Perak cheering on and welcoming Lee on the last day of her journey around Peninsular Malaysia, Sarawak, Sabah and Labuan.

“On some days, the weather was so hot that it really took a toll on my body, but I just kept reminding myself to keep going,” said Lee. A handful of motivational quotes she had chosen alongside the support from her parents got her through the tough days.

After completing the peninsula leg, Lee and her father set off to Sarawak where she cycled from Kuching to Miri.

“My mother went back to work while my father accompanied me for a week,” she said.

Sarawak did not come easy for the economics graduate as the roads along the yet-to-be-completed Pan Borneo Highway were both dusty and filled with gravels.

“It was scary, there were hardly any road signs and the road was bumpy with large vehicles driving by every now and then.

“My father was also worried for me but I’m glad we made it through,” she said.

Upon reaching Miri, her father drove all the way back to Kuching to return their rented car.

“The car rental company did not allow us to drop it in Miri and my father had to brave those bumpy roads just to return it,” said the middle child.

From Miri, she flew to Kota Kinabalu, Sabah, to cycle around the state before taking another flight to cover Labuan.

Finally, she passed through Bukit Jalil, Klang and Kuala Selangor before completing the distance in Teluk Intan on her 34th day.

Lee’s feat has been recognised by the Malaysia Book of Records for the Longest Distance Cycled by a Female.

The business analayst said she did not want to cycle just for the sake of it but wanted to do something meaningful along her journey.

In conjunction with her cyling mission, she started “Wheeling for a Change” where the public could donate to Hope Mission Children’s Welfare in Teluk Intan, Perak.

“I usually drive past it to get home,” she said, adding that the home had 34 children aged between three and 18 years old.

During her visit, she noticed worn-out furniture, congested rooms and faulty electrical items.

“Any additional money will be channelled to their community development projects,” she said.

To-date, Lee has collected RM27,823 for the home. Those who want to contribute can visit www.simplygiving.com/wheeling-for-a-change