Subramaniam (right) shaking hands with Indran after signing the memorandum of understanding to host the fifth Sukim games next year. Looking on are Mohan (second from right) and MISCF deputy-president J. Dhinagaran.

Selangor has been chosen to host the fifth edition of the Sukan India Malaysia (Sukim) in Shah Alam next year.

“The dates for the fifth Sukim will be announced later,” he said at a signing ceremony in Puchong.

Sukim is the brainchild of MISCF and is aimed at providing an opportunity for the Indian community to showcase their talents in various sports.

Mohan also paid tribute to founder member Y.P. Sivam who had played an influential role in ensuring the success of the Games since its inception.

“We are planning to do something to honour his sacrifices to the Indian sporting community,” he said.

Sivam, who was also a sports journalist with The Star, died on Aug 11.

The first Sukim was held in AIMST Universiti in Semeling, Sungai Petani in 2014, followed by the second in Gambhir, Johor, and in Universiti Sains Islam Malaysia (USIM) last year.

The athletes contested in 11 disciplines, with Selangor becoming the overall champions for the third time, amassing 23 gold, 21 silver and 15 bronze medals.

Johor won the Games when they hosted in 2015.

MISCF Selangor chairman T. Indran said it is a heavy responsibility but they are prepared to do their best.

“We have to start preparations soon. We want the Games to be remembered as the best,” he said.

Indran said they had planned some activities including a torch run and the details would be announced in due course. 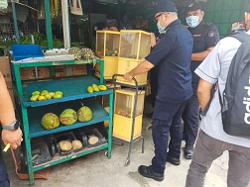