LONDON (Reuters) - Heavyweight world champion Tyson Fury weighed in with an eight pound advantage over challenger Derek 'War' Chisora on Friday with a promise of 'carnage' to come at the Tottenham Hotspur stadium.

Saturday's WBC title fight could be a chilly, and possibly short-lived, affair for the 60,000-strong crowd but both Britons tried to turn up the heat as they stood on the scales at a North London exhibition centre.

Chisora, who has been outclassed twice by Fury in the past but is back for another big payday after losing three of his last four fights amid suggestions he should call it quits, weighed in at 260 pounds and 10 ounces.

Fury, unbeaten and with a 32-1-0 professional record, hit the scales at 268 pounds and 10 ounces -- four pounds heavier than his previous fight in April against compatriot Dillian Whyte.

Walking in with the belt slung over his shoulder and to the sounds of his own charity recording of "Sweet Caroline", Fury told the fans to expect fireworks -- although maybe not for very long.

"Tomorrow night we're going to throw down again and we're going to put on an absolutely brilliant fight," declared the 'Gypsy King'. "Carnage. Just expect carnage tomorrow. It's going off.

"We're looking for a...bang, I hit him, he hits the floor and I drive straight back to Morecambe Bay. "As soon as it goes ding ding, it's on. On like Donkey Kong, and I'm going to jab his nut right off.

The two fighters then stood face to face, gazes locked and Fury staring down at his older and shorter opponent as the time ticked away.

An official waved a sheet of paper between them but neither looked away or took a step back.

Chisora, whose last fight with Fury in London in 2014 ended with a 10th round retirement, gave very little away with his face wrapped in a Union Jack bandana, eyes hidden behind sunglasses and a 'War' cap covering his head.

"I'm buzzing, I'm excited," the 38-year-old, who has 12 defeats in a 45 fight record, told fans with a deadpan voice as he stepped up to the scales. "It's going to be electric.

"We've shook on it, we said we're going to go toe-to-toe with the best first round in boxing history basically."

Asked about his pre-fight plans, Chisora said he would spend the evening relaxing at home with his family and maybe watching some cooking shows with one of his daughters. 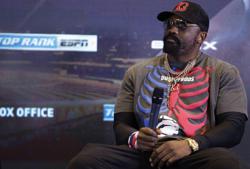 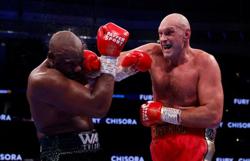